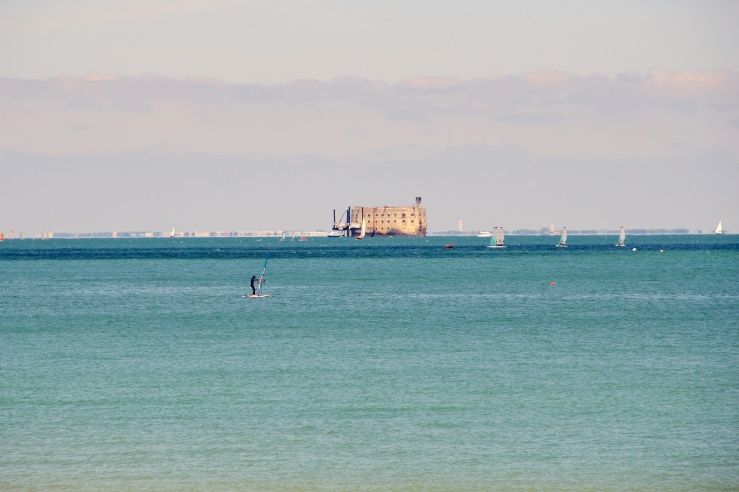 Between two small “islands” in the Pertuis d’Antioche straits on the west coast of France stands Fort Boyard. It serves as a constant reminder of the futility of human endeavour.

For a long time the fort was considered to be too expensive:

Your Majesty, it would be easier to seize the moon with your teeth than to attempt such an undertaking in such a place”. – Vauban, Louis XIV’s leading military engineer

However by 1800 Napoleon judged that this was a project worth undertaking and work began in 1801. The work was suspended in 1809, and not resumed until 1837, by King Louis-Philippe. By the time it was completed in 1857, both Napoleon and Louis-Philippe were dead.

Unfortunately, by 1857, technological advances in the range of cannons had increased significantly. When it was finally complete, this fortress, which took 28 years to build, was already obsolete. After a brief spell as a military prison it was abandoned to the sea.

The fortress still stands on the sand bank between Île-d’Aix and the Île d’Oléron, crumbling away with the tides. There are several lessons we can take from this story:

The need for fortifications in this area was based on:

The proposed solution to this problem was obviously costly in both time and money; a whole town was built to support the workers. However this was not the only solution available to the French. There were other options they could have considered:

The advantage of these options over the fortress would have been that they would provide value in other locations as well; the fortress was only of value in the one area in which it was built. A search for a more flexible solution may have resulted in improved defences against land based attacks like the French experienced 100 years later, as well as attacks from the sea.

Even if the French considered that a longer range cannon was not possible when the fortress was begun in 1801, but they time it was completed in 1857 it was a reality. At some point it must have been clear that the advances in cannon ranges were making progress and the fortress would not have brought the value that was originally planned. Why wasn’t the fortress abandoned at this point?

The concept of the fortress was always to make up for a short-coming in cannon ranges. Any project that aims to solve problems caused by a shortfall in another technology is at risk of becoming obsolete when these problems are solved (Twitter API clients anyone?).

Fort Boyard took 56 years from start to end; half these were spent building; the other half on hold. Looking at the design of the fortress it is clear that part of the reason for this timescale is that this is a large fortress with sufficient room for a garrison of 250 men. Given that the primary aim of the fortress was to provide a platform to improve artillery cover, the size of the fortress is surprising . Why wasn’t a simple platform built first, for a few cannons and a small shelter as cover for a few men to loaded them (well maybe it was, I’m no historian). A smaller project like this may have been completed in a much shorter timescale and would have improved artillery cover for a period of time when that would have been valuable. Perhaps the project became over-scoped which explains why it wasn’t completed in a timely enough manner to be useful. The same lessons apply when building other things; start small, think about a minimum viable project, ship as soon as possible.

It could be argued that the real problem demonstrated by Fort Boyard is the lack of a goal oriented vision. Were the French so focussed on this one solution to their problem that they overlooked other opportunities they could be investing in? When building anything it is vital to have a clear vision of what your goal is; in this case the goal should not have been to build a fortress, it should have been to defend against invasion. If the focus was on this goal then the fortress would never have been completed. In the same way, when building anything we need to focus on what the end goal is; not just the next iteration of our current {thing}. Without a goal oriented vision we risk building an improved version of something which is soon to become obsolete.

Disclaimer: I am not a historian. this is an over-implication of complex historical events. Please do your own research.

I make things. I particularly like to make music. Music is meant to be fun, that's why it's 'played'. View all posts by Ben Dwyer